What does ‘conscience’ mean in Shakespeare’s sonnets? What does it mean to read his Twelfth Night through trans* experience? How are Russian creativity and performance inflected by the artist’s sexuality – and should it matter?

These were just some of the questions that were raised, examined and discussed in the joint panel held by the Centre for Gender, Identity, and Subjectivity (CGIS, Faculty of History) and TORCH, Friday 22 February 2019, chaired by Jane Garnett (Wadham College, Oxford). 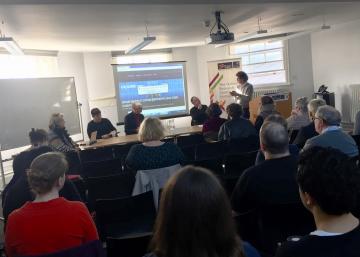 Bruce Smith, fresh from delivering this year’s Stonewall Lecture at the University of Southampton (‘To Queer or Not to Queer Shakespeare’), considered the subjectivity embedded in the bard’s 151st Sonnet: ‘Love is too young to know what conscience is’. ‘Conscience’ in this sonnet, he argued, was about as close to a sexual subjectivity available to the early modern English. We hear the erotic longing of the author and his abasement in his desire for his beloved. Emma Smith reported on the editorial intricacies of reading and editing Twelfth Nightin the current moment of heightened awareness of trans* identities. ‘Viola as Cesario’ – the female hero of the play in male guise – seems to embody and invoke the very experience of trans*, but editorial conventions suppress this perspective. Both Shakespeare scholars launched a lively conversation about the representation of women and trans* in the theatre, and the significance of histories of queer reading. 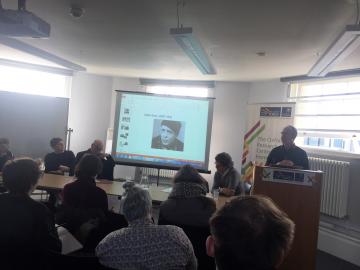 Philip Bullock (TORCH, Wadham College, Oxford) and Dan Healey (St Antony’s College, Oxford) spoke on Russian themes. For Bullock, Tchaikovsky’s correspondence with its language of same-sex love, poised historically between the registers of law and medicine, illustrated the indeterminacy of identity even as it celebrated the clearly queer love life of the composer. Healey examined Marc Almond’s queer performance of ‘Friendship’, a hit for the Stalin-era popular singer and queer Gulag inmate Vadim Kozin. The significance of queering biographies of the artist in Russian culture is still controversial, and remembering Tchaikovsky and Kozin challenges Russian politicians and cultural authorities to address the ‘untraditional’ sexualities of nationally esteemed artists.

‘Performance and Queer Histories’ raised many questions about the politics of commemoration, and the meaning of ‘LGBT’ histories, that scholars find challenging in the annual observance of LGBT History Month.