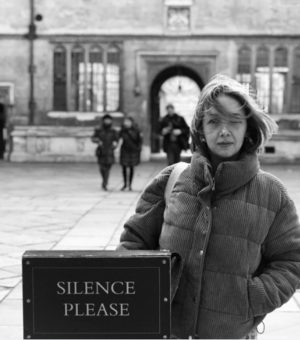 I think and write about silence in history. My interest in the notion of silence arises from the work I have done on the Armenian genocide and for which I have received several awards. My first monograph on the topic was a completely empty book (2010, 2015) which is on view in several library and art collections around the world.

The book represents my attempt to address the narrow and limiting scope of denial, and its inability to articulate the aftermath of a catastrophe whose effects continue to be felt in our present. I also think of the book as a retake on what the American poet Muriel Rukeyser said in 1949: ‘During the war, we felt the silence in the policy of the governments of English-speaking countries. That policy was to win the war first, and work out the meanings afterward. The result was, of course, that the meanings were lost.’

My forthcoming monograph Reading Silences: Essays on Women, Memory and War in 20th Century Turkey (Degruyter, 2019) discusses how the subject of the Armenian genocide – despite being absent from Turkey’s national narrative – returns as a contemporary discourse which revolves around ‘what is spoken about but not said, and what is not said but is spoken about.’ It provides a critical methodology for responding to textual silences, and those in oral histories, and explores the relationships between silence, voice and power in historical narratives.

With the poet and author Kate McLoughlin, I am curating Into Silence, a series of silent performances featuring film-makers, musicians, sound-installationists, dancers, mime-artists, body percussionists and light-sculptors. I have written the piece 19’15 and performed it at various cultural institutions. Future plans include a new edition of my empty book, a collaboration with Common Ground on a silent tour through the museums in Oxford, and an inter-disciplinary network of scholars working on all aspects of silence.

In my role as British Academy International Newton Fellow at the History Faculty, I am currently preparing a critical edition of Harutyun Alboyadjian’s memoir Dark Times. The book is an account of Alboyadjian’s experiences as a 12-year-old during the Armenian Genocide, as a young man in Stalin’s gulags, as a Soviet soldier in a Nazi POW camp and then as an ordinary family man in Soviet Armenia. In my opinion, what makes his life story so unique– even among survivor testimonies – is not the simple and unaffected language he uses to describe what it meant it to be a child survivor, an orphan, a victim, an innocent man and an Armenian in these inhumane conditions but his courage to suggest that it (all) had meant nothing. Reading his life story we are more than once reminded of Primo Levi’s imperative about survival in Auschwitz: ‘Consider if this is a man ….’ Like Primo Levi or Elie Wiesel, Alboyadjian offers the possibility that humanity perseveres through even the darkest times. Alboyadjian’s memoir belongs to the emerging body of Armenian testimonial literature and its English edition will undoubtedly become an indispensable source for understanding the connective histories of state-sponsored human rights abuses in the twentieth century. (Dark Times is currently under review with the British Academy Monograph Series published by Oxford University Press.)

Additionally, I am facilitating the digitization of an important, widely unknown, collection of 147 testimonies of child survivors of the Armenian genocide, located at Columbia University Libraries (AOHP). My postdoctoral research project Thus makes us orphans all is partly based on the oral testimonies in this collection. Departing from the format of traditional histories on the subject, Thus makes us orphans all intends to tell the history of the Armenian genocide through the eyes of Armenian and Turkish war children.

I am affiliated to the AHRC–funded project ‘The First World War and Global Religions,’ led by PI Dr. Adrian Gregory.

My forthcoming monograph Reading Silences: Essays on Women, Memory and War in 20th Century Turkey (Degruyter, 2019) discusses how the subject of the Armenian genocide – despite being absent from Turkey’s national narrative – returns as a contemporary discourse which revolves around what is spoken about but not said, and what is not said but is spoken about.

It provides a critical methodology for responding to textual silences, and those in oral histories, and explores the relationships between silence, voice and power in historical narratives. Whether we want to be or not, we are implicated in the construction of silence—with silence as the space between what someone says (or does not say) and what we want them to say. Reading Silences shows how we can nonetheless use silence to illuminate not just which stories are told and untold, or silenced and suppressed, but how these stories and their silences affect us as their listeners. How do we negotiate and understand the construction of a silence? How can we highlight the absences we uncover and notice, but still also respect the silences we encounter?

This book is a direct result of my engagement with BABE (Bodies Across Borders: Oral and Visual Memory in Europe and Beyond), a research group led by Luisa Passerini at the European University Institute (2014-2018), and the adjoined living archive group (2017-ongoing). It was only in my conversations with my colleagues at BABE that I came to explore the intersubjective character of silence more. I would like to thank them for their invaluable contributions to this book.

Professor Kate McLoughlin (Harris Manchester College and the English Faculty) and I have been awarded £4,000 from Public Engagement with Research Seed Fund 2018/19 for our project Into Silence.

I have been awarded £2500 from Public Engagement with Research Seed Fund 2018/19 for my project Refugee Children: Now and Then.

Interview with Azatutyun Radiokayan on April 23, 2014.

Creative Director for the Voices, Bodies and Minds Theatre Group (2015) funded by the project “Cross-cultural Bridge between the Youth of Armenia and Turkey” and implemented within the framework of the programme “Support to the Armenia-Turkey Normalisation Process” funded by the European Union.