The Female Body and Trauma in Elizabeth Siddal’s sketches

“Her hair appears to be on fire,

but it is only a trick of the light” 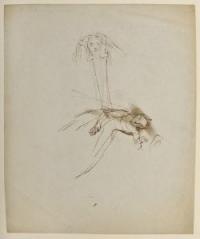 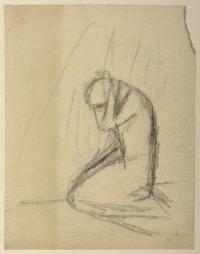 Elizabeth Siddal (1829–1862) burns through the canvases of the Pre-Raphaelite brotherhood, dressing in the guises of mythological and Biblical figures, her face sketched over and over again. The flame-haired muse of the Pre-Raphaelite brotherhood, she is immortalised on the walls of the Tate Britain as Millais’ Ophelia (1852). But Siddal is often only remembered as the tragic muse of Dante Rossetti – when she was an artist in her own right, creating drawings and poetry which expressed female experience. Here, we examine how Siddal depicts the female body and traumatic experience in her two sketches, A Woman and a Spectre (approx. 1850 – 1862, Ashmolean print collection) and A Kneeling Woman(approx. 1850 – 1862, Ashmolean print collection).

A Woman and a Spectre is a pen and brown ink sketch: a woman lying sideways in a long dress, her arm hurriedly drawn twice, rests her head. From her body vertically rises up a thin, terrifying figure, her hands tearing her crazed hair and her eyes wide. Her lips closed and slanted, drawn from tiny, jagged lines. The drawing seems to depict the moment of the soul leaving the body. Yet, what is unique is that Siddal depicts the female experience of this – the soul is more troubled than the remaining body, experiencing another form of pain in the spiritual. Woman’s pain, for Siddal, never stops at the bodily – it rages in the mind, the spirit, the soul, an existence of anguish in every form. Siddal’s jagged, repetitive pen marks show the female body under stress; every pleat in the resting woman’s dress, the lines of her eyebrows, her shifting hands are done twice or more in ink. She strives to depict her forms in an intensity, subject to movement, under the pressure of the pen as well as their internal struggles.

Siddal’s sketches are a translation of her perceptions of the female condition, her internalised experiences of suffering which are processed through the act of artistic creation. For Siddal, the body has a memory; the physical vessel holds more than just the bodily, experiencing ever moment lived through.

J.R Ehnenn suggests Siddal’s works can be considered as ‘creative outpourings of a female artist-poet whose limited fame is due chiefly to the ways in which her model’s body contributed to other artists’ works of art’. In her sketches, Siddal reclaims the female body from being merely a creation of the male artist. And in the era of the Pre-Raphaelites, femininity was depicted as silent, beautiful, her appearance stable and pleasant. Siddal, the face in their canvases yet also an artist like them all, takes the Pre-Raphaelite woman and makes her real, breathing and suffering, a body in the turmoil of emotion. For Siddal, the female body should not only be beautiful and easy to look upon, but difficult to face as she goes through the emotions and struggles of being.

The second sketch A Kneeling Woman similarly features a woman clinging to hair in anguish. I think there is something so important in Siddall’s fascination with this gesture; it is an instant signifier of pain, a gesture of struggle, one Siddal uses to indicate the internal emotions of her subject. In this sketch, a woman kneels to the ground and faces downwards, obscured by her arms, abstractedly created in darts of pencil. This sketch is quicker, more fluid than the other, but holds similarities to the previous sketch. Here, the woman is created from even more lines of pencil – her dress is a collection of jagged, broken lines, areas where she has pressed so hard the pencil blackens are visible against her waist. The background is made from a few vertical lines, like tears from claws through fabric, like slashes on a Lucio Fontana canvas. Her position shows her folding in on herself, carefully bending down under a weight of an unknown suffering, instantly reminded me of the pencil drawing by Van Gogh entitledWorn Out (1882). A depiction of mental exhaustion and struggle, both artists seeking to translate the internal in pencil. Siddal uses the pencil to translate the fraught, cracking demeanour of her struggling subject – the irregular lines cracking like glass through the dress and along the body, a haunting depiction of an ill mind. In this, we hear the inner scream of the suffering woman.

Elizabeth Siddall began painting in 1852 and made over a hundred works until her death. She was recognised as a talent by John Ruskin, who nurtured her artistic talent. But Siddal struggled with mental illnesses misunderstood at the time, including depression which contributed to her becoming fatally addicted to laudanum. But her tragic ending is precisely what should illuminate her drawings; her sketches, full of suffering and struggle, are beautiful in their honesty and emotion. In the darkness she could find beauty. She sought artistic inspiration to depict the female condition – her images highlight the resilience of her subject and her own mind.

Kate Haselden is a second year undergraduate reading English Literature at Mansfield College. Her research has particular interest in feminist literary theory and the relationship between literature and visual culture.

With thanks to the Ashmolean Museum for permission to use the images.

Fancy contributing a blog post? Get in touch with us - email cgis@history.ox.ac.uk