Conference Review: New Directions in the History of the Women's Liberation Movement

On 4 December 2017, Sarah Crook and Tess Little convened a one day workshop entitled “New Directions in the History of the Women’s Liberation Movement” at All Souls College, Oxford. The workshop brought together historians of the British women’s liberation movement and activists past and present to rethink the history of 1970s feminisms. As Sally Alexander reminded attendees in the final session of the day, the women’s liberation movement in Britain was from the moment of its inception concerned with writing history. The workshop presented the opportunity to reflect on the implications of the histories we are now writing in light of the contemporary challenge to defend women’s rights in an era of austerity, entrenched right-wing politics, and unabated revelations of sexual harassment and violence.

The workshop drew attention to a number of emerging bodies of research in the history of the women’s liberation movement including an interest in subjectivities and selfhood, the international dimensions of women’s activism, and the themes of both cohesion and fracture among activists – particularly around race and ethnicity. It reflected an ongoing historiographical turn away from a focus on movement politics towards the broader political, social, and personal trajectories of feminist activism. Papers by Emma Lundin and Laura Beers linked the history of women’s liberation activism with accounts of institutional politics. Both suggested that drawing together histories of women’s grassroots activism with party and parliamentary politics was key to understanding the development of feminism in the period since the 1970s. Kate Mahoney’s paper on the promotion of feminist therapy to ‘non-movement’ women unpacked some of the tensions inherent in feminism’s movement into institutional practice from a social angle.

Several papers suggested intriguing directions for future research. In a paper on the goddess movement within 1970s feminism, Ruth Lindley argued strongly that historians begin to take seriously the maternalist and spiritualist tendencies within women’s liberation and challenge the secular cast of movement histories. Alana Harris echoed this call by drawing attention to the importance of maternalism and spirituality in black women’s accounts of feminist activism. It is perhaps also worth considering the connections between maternalist positions within 1970s feminism and the maternalism of strands of late 19th and early 20th century feminism.

There were also calls to more fully tackle the intellectual history of the women’s liberation movement. In a paper on second wave feminism and popular existentialism, Kate Turner traced Sheila Rowbotham’s intellectual development as representative of the legacies of existentialist concerns with the autonomy and authenticity of the self within feminist thought. Turner suggested that this particular strand of individualist ideology has had important consequences for contemporary modes of neoliberal selfhood.

Over the course of the day panellists also drew attention to the growing archive for the history of 1970s feminisms. They emphasized both the importance and the challenges of building dialogue among researchers, archivists, and activists. In a paper on memories of the black women’s movement, Alana Harris presented on key themes that emerge out of the narratives collected in the Heart of the Race oral history project housed at the Black Cultural Archives. Polly Russell documented the British Library’s recent work in curating the Sisterhood and After oral history collection and digitizing Spare Rib. She also described a new project, “The Business of Women’s Words,” that looks at how feminist and entrepreneurial projects intersected through the story of the feminist publishing industry. Kate Turner’s reminder not to miss out on exploring the seemingly less relevant ‘corners’ of the archive – particularly those which touch on personal style - fell on receptive ears. It is also worth thinking broadly about the types of archives that contain feminist histories – not only movement or expressly political collections, but also charities, NGOs, and indeed private profit-making organizations.

In her introductory remarks, Sarah Crook noted the absence of papers on sexuality and on class in the proposals received for the workshop. But it was the absence of work that situated second wave feminism in relation to the new political economy that has shaped Britain since the mid 1970s that became most concerning as the conversation shifted to the present over the course of the day. In a stirring presentation that concluded the workshop, economist and activist Faiza Shaheen discussed rising precarity and the uneven consequences of austerity for women and minorities. Laura Beers asked how to make sense of the fact that Thatcher had sold women on austerity in light of these more recent developments, but discussion came up short in tying the past to the present status of women, and of feminism. We ended the day with concerns about what kind of feminist utopias we could imagine, and politics shape, in the context of radical wealth inequality. This points to the need for new histories that engage with the challenges of feminist politics in an era of intense socio-economic deprivation. These would necessarily be integrated histories that chart the multiple oppressions of race, sexuality, and disability, as much as gender, in order to help us think through collective paths forward.

Sarah Stoller is a PhD Candidate at the University of California, Berkeley. Her dissertation project charts the rise of the ‘working parent’ in late twentieth century Britain. By considering how changes in parenthood were linked to broader contemporary shifts in the cultures of work and home, gender relations and economies of time, she aims to explore the mixed legacies of second-wave feminism in the neoliberal era. 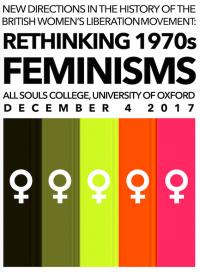